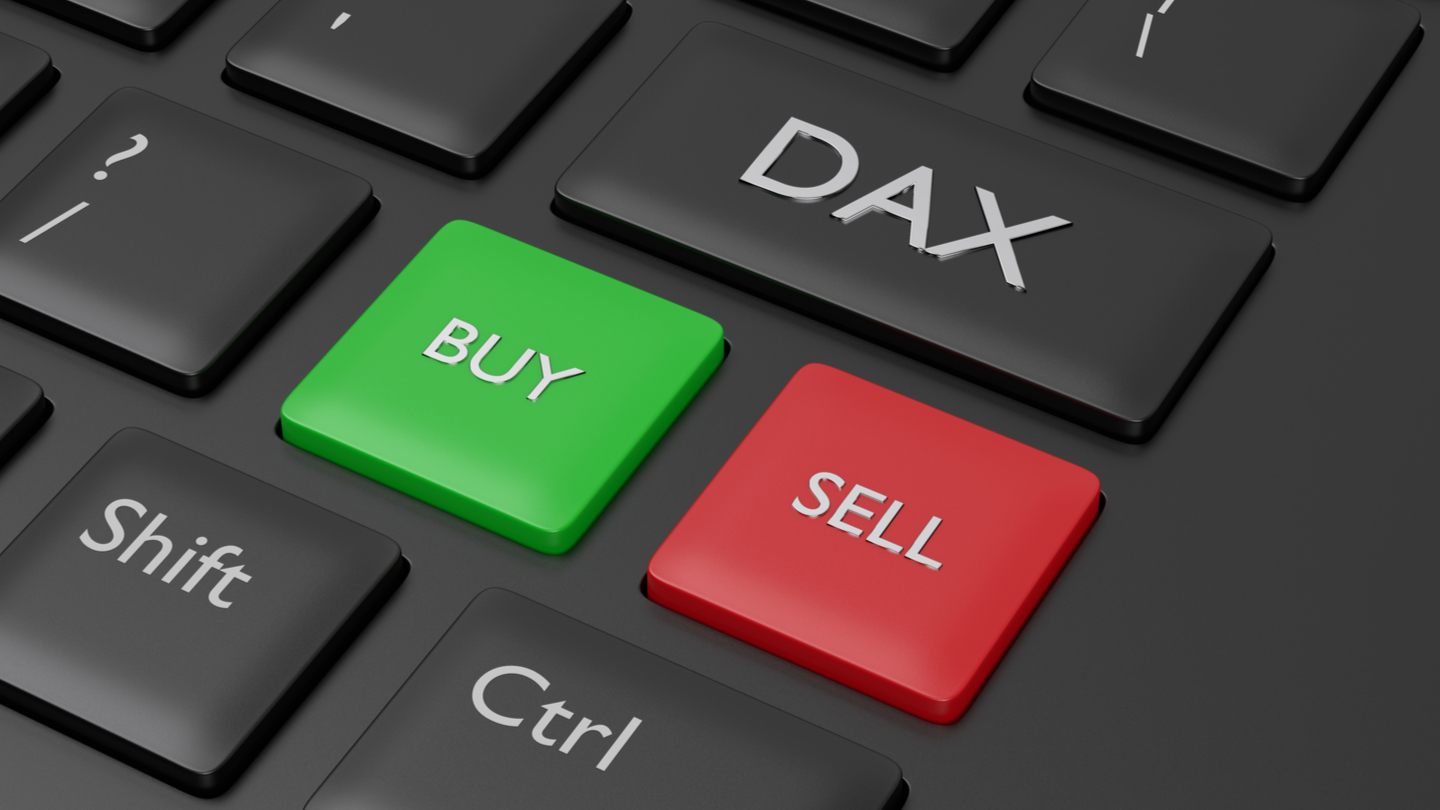 It’s been a tough year for Germany’s DAX. The stock market index, which is used by the international community as a benchmark for Europe’s economy, has been down over 20% since its record high on 23 January 2018. It is now officially in a bear market and marks the end of a six year winning streak – the longest since 1986.

There are multiple reasons why the DAX has struggled in 2018. However, they can be broken down into three main categories.

Companies across various sectors have issued profit warnings in recent months. However, it has been the automotive industry that has been hit particularly hard:

While the car industry is facing difficulties transitioning into electric vehicles – subduing overall demand for new diesel or petrol cars – it’s the ongoing trade war between the US and China which has taken its toll on their share prices. One reason is because some of the most popular vehicles, from Daimler and BMW, are produced in the United States and then shipped to China – meaning the companies are heavily affected by higher trade tariffs. 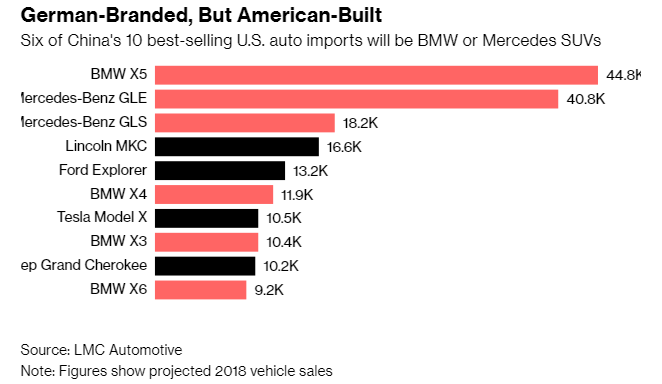 Source: Bloomberg. Please Note: Forecasts such as this are not a reliable indicator of future results, or future performance.

Even some of the country’s biggest banks, such as Deutsche Bank AG and Commerzbank AG have struggled in recent years. The latter’s share price dropped so much it lost its status as a German blue chip company and dropped out of the DAX index – which it has been a part of since 1988.

However, the German government owns an approximate 15% stake in Commerzbank AG and has been rumoured to be coordinating a possible merger between the bank and Deutsche Bank.

On the 7 December German Chancellor Angela Merkel gave a farewell speech to her ruling Christian Democrats (CDU) party as she announced she would be stepping down as party leader.

She was elected as party leader in 2000 but will not be seeking a new term beyond 2021. However, she will still remain on as Chancellor. The new party leader, Annegret Kramp-Karrenbauer, won 52% of the votes for the position of party leader. But, due to a string of recent poor election results, the party has a lot of work to do, especially as Europe struggles with the rise of anti-EU populism.

The DAX index is highly sensitive to views on the global economy. Many of the 30 companies listed in the DAX index are export-driven. This means they make most of their income through building things to sell to the rest of the world – such as cars, as discussed above.

In 2018 it hasn’t just been the DAX stock market index that has sold off. Most stock markets indexes around the world are trading below where they opened at the beginning of the year. Sentiment soured across worldwide stock markets. During the first week of December:

It’s only the Nasdaq 100 that could end 2018 positive – in the first week of December it was up nearly 2% for the year so far. However, it’s clear to see the weakness that lies ahead in European markets, such as the DAX.

What do the charts tell us about the DAX index?

The DAX30 index CFD has been a longer term uptrend since the 2008 financial recession. However, recent price action is threatening that trend higher as the long term trend line highlighted in blue now starts to break. Let’s take a look at the weekly chart for more analysis of the buyers and sellers in the current market. 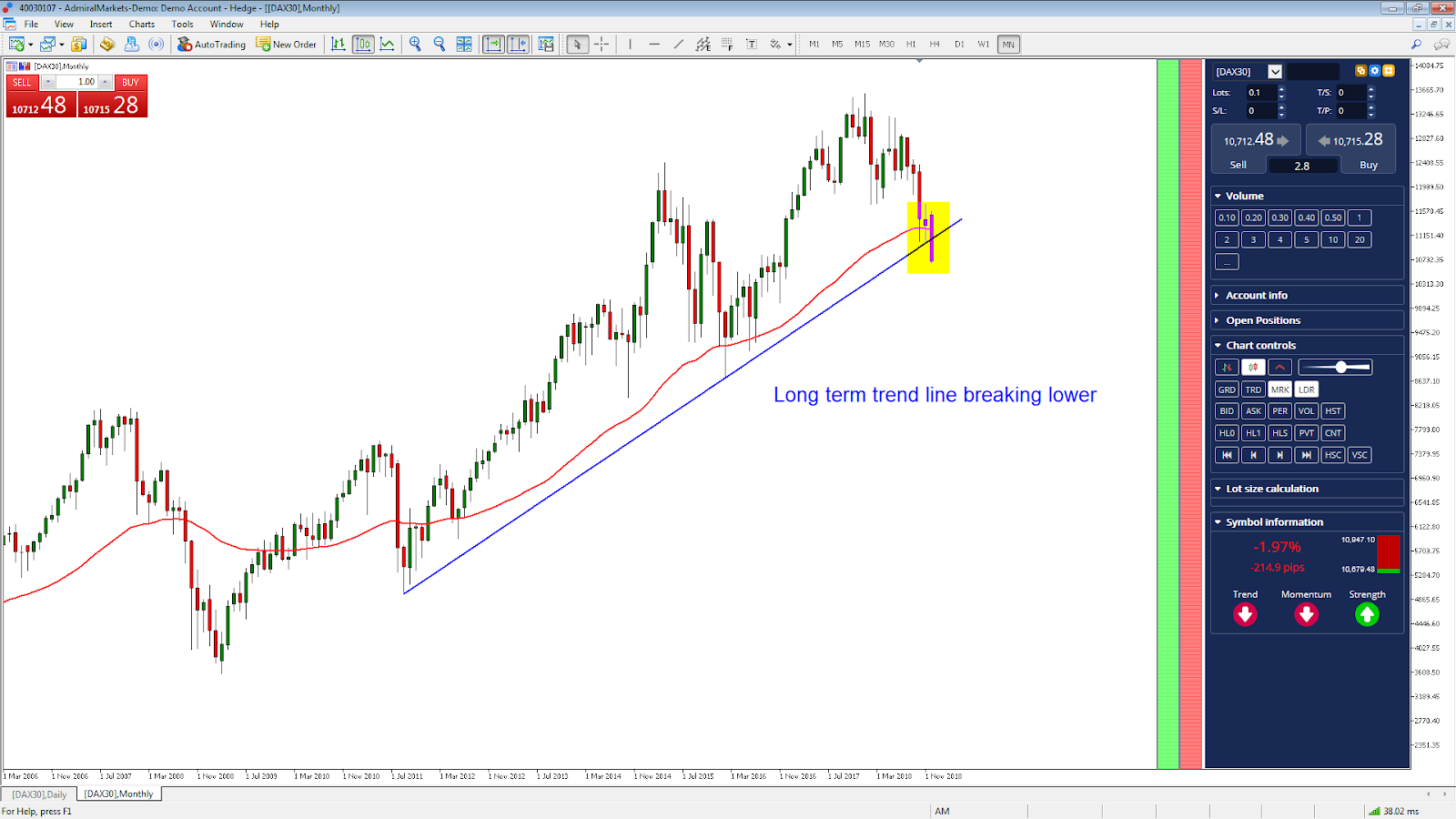 Source: Admiral Markets MT5 Supreme Edition DAX30, Monthly – Data range: from 1 March 2006 – 9 December 2018 – performed on 9 December 2018 at 6:08 PM GMT. Please Note: Forecasts such as this are not a reliable indicator of future results, or future performance.

When we review the weekly chart, we can see that in 2015 the market bounced off its 200 weekly moving average – highlighted by the green line. Moving averages help us identify the trend but can also act as levels of support and resistance where markets can turn direction. 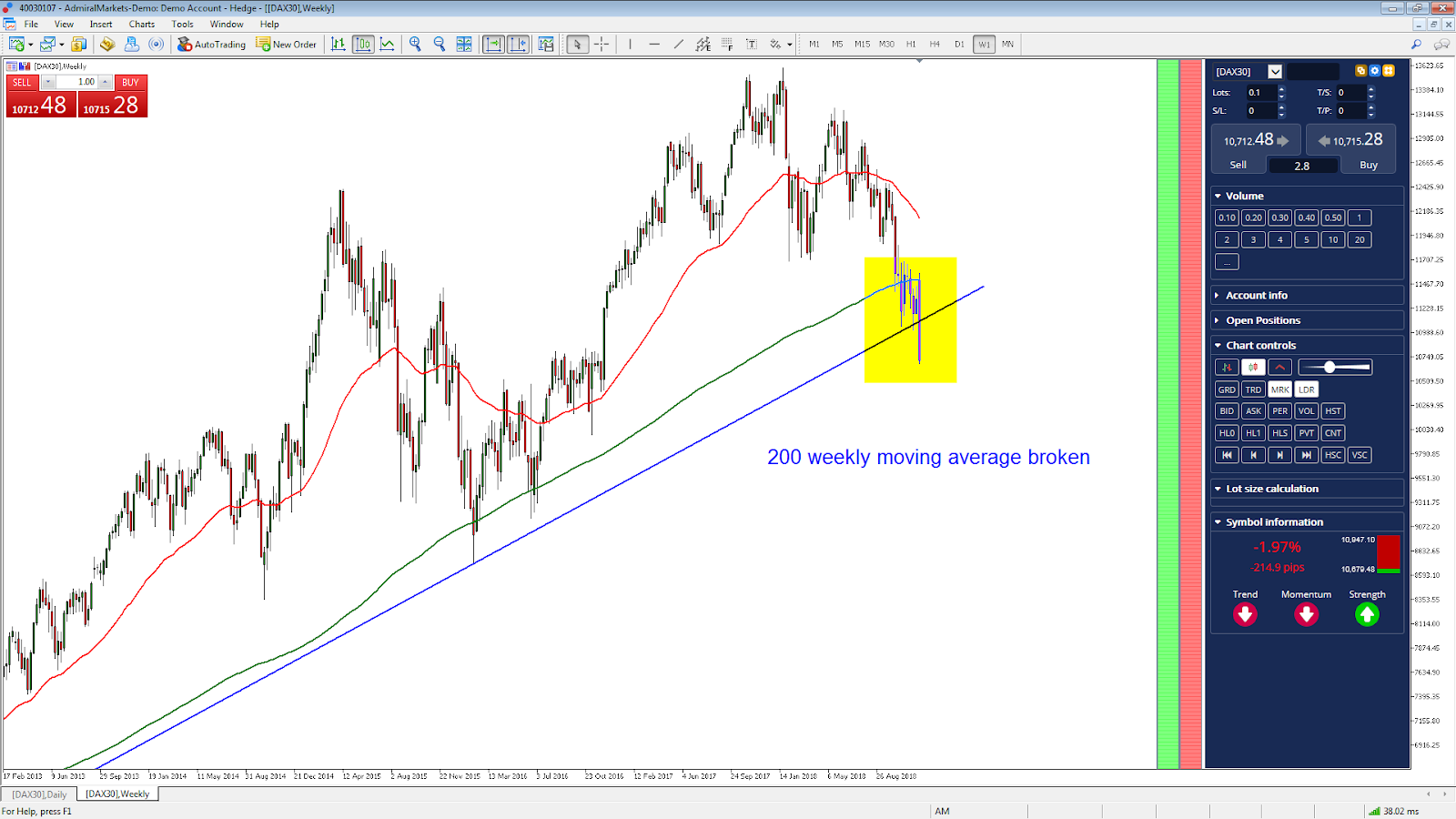 Source: Admiral Markets MT5 Supreme Edition DAX30, Monthly – Data range: from 17 February 2013 – 9 December 2018 – performed on 9 December 2018 at 6:13 PM GMT. Please Note: Forecasts such as this are not a reliable indicator of future results, or future performance.

In December 2018 the market broke through the 200 weekly moving average and actually found resistance off the level to push lower, break the longer-term trend line and decline 20% from its high – officially entering a bear market.

However, while the short-term momentum is to the downside, there may be some speculative longer-term players who are buying the index at a 20% discount for their longer-term portfolios. This is where your trading plan and strategy become essential.

Knowing your style of trading will help to dictate your entry and exit levels – what are yours?