Tariff man Trump in action again – Equities about to sell off? 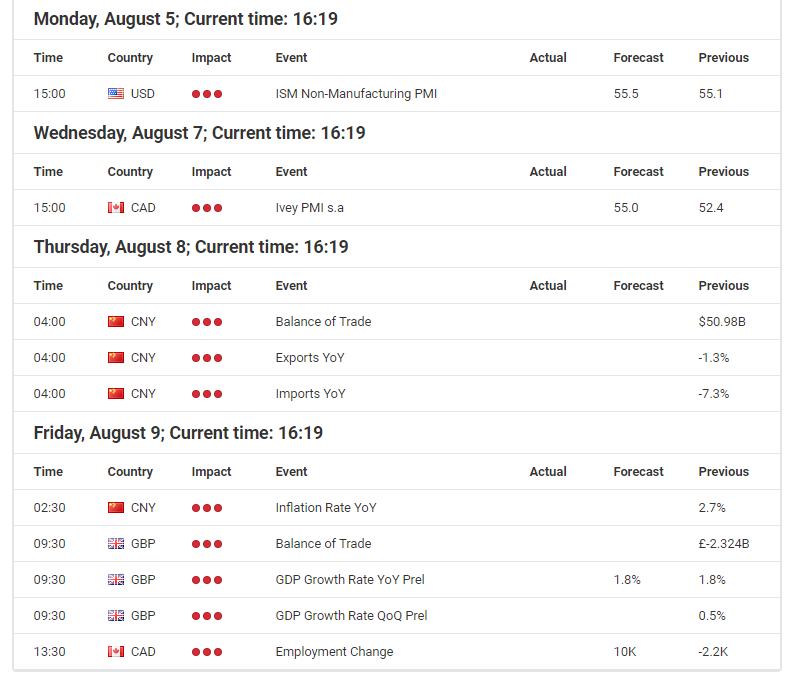 Based on this, the technical picture on a daily time-frame has now shifted back to short again. The break lower goes hand in hand with a drop back below the EMA(200) on a daily time-frame, switching the overall mode to bearish again and making it likely that bigger market participants start to unwind their long-positions in Equities.

That said, below 11,900 points the next target on the downside can be found around the June lows around 11,600 points while only an attempt and run back above 12,600/650 points would brighten the technical picture which seems unlikely given the thin economic calendar in the days to come and fears around further aggressive tweets from Trump:

As expected, the main event of the last trading week was the widely anticipated Fed rate decision on Wednesday.

In our last weekly market outlook we stated:

“[…]the main focus on Wednesday will be on the rhetoric of the Fed statement and how it will be interpreted:[…]”

But it wasn’t the Fed statement respectively rate decision, but the rhetoric of Fed chairman Powell which caused volatility and USD strength: while the Fed cut rates by 25 basis points, Powell said that the rate cut should be considered as mid-cycle adjustment and that markets shouldn’t expect a series of rate cuts now.

While he also emphasized that he didn’t say that it’s just one rate cut, it became clear that the Fed in general considers the US economy to remain strong while economic downturns will most likely be triggered by external factors like a further trade war escalation between the US and China.

As a result, the USD Index Future pushed above 98.00 points and initially it looked as if further gains, especially against the Euro, were likely.

But on Thursday, the tide had turned after the announcement of Trump, that 10% new tariffs on Chinese goods will be imposed from September.

As a result, with Trump going after China and escalating the trade war between the US and China further, the expectation of the Fed delivering further rate cuts and monetary stimulus as a result, pushed the USD lower and could do so further, at least short-term in the days to come.

Still, as long as the USD Index Future trades above 95.00 the mode for the Greenback stays bullish, even though with a neutral touch, should the break above 98.00 points be a fake breakout:

Don’t forget to register for the weekly webinar “Admiral Markets’ Weekly Market Outlook” with Jens Klatt, every Friday at 12pm London time! It’s your opportunity to follow Jens as he explores the weekly market outlook in detail, so don’t miss out!

In our last weekly market outlook last Monday, we wrote

and indeed, the EUR/USD saw a short stint into exactly that region and found with the Fed last Wednesday the bearish driver to result in a drop below 1.1100, pushing the currency pair to its lowest levels since May 2017.

While the ECB should be expected to deliver further monetary stimulus at the meeting in September by lowering interest rates into negative territory and level the path to further asset purchases (QE), the rhetoric from Fed chairman Powell was in relation to that quite ‘hawkish’ (please find details in the USD paragraph above).

That said, we consider the EUR/USD clearly bearish in the days and weeks to come, expect market participants and large speculators to anticipate such a dovish ECB stance with a first target below 1.1000 around 1.0750 and realistic potential down to 1.0400/0500 in the second half of 2019, especially with the rising signs of a trade war escalation between the US and Europe now, too.

From a technical perspective on a daily chart only a push back above 1.1400 would turn the tide, but seems very unlikely given the current fundamental picture:

After the Fed rate decision on Wednesday, USD/JPY took a short try to recapture 109.00, but was aggressively sold and pushed below 106.80 into the weekly close.

After Fed chairman Jay Powell characterized the expected rate cut by 0.25% from the Fed on Wednesday as mid-cycle adjustment and signalled that markets shouldn’t expect a series of rate cuts now, a tweet from US president Trump, announcing 10% new tariffs on Chinese goods from September resulted in a sharp risk-off mode in all asset classes and thus pushed JPY higher on a broad front.

The reason for Trump’s aggressiveness in regards to China seems that the Fed communicated the rate cut as an anticipation of a global economic downturn.

A downturn which could be triggered by a further trade war escalation between the US and China.

And after Trump tweeted his disappointment on the Fed rate decision on Wednesday, the announcement of new tariffs seems to aim on giving Trump what he wants to get from Fed:

rate cuts, cheap money and thus fuel for further All Time Highs in US Equities – no matter what.

So, expecting a dovish Fed, dropping US yields and the technical break below 106.80, USDJPY should be expected to gain further bearish momentum in the days to come, finding a potential target around 105.00:

“[…]the market has nearly completely priced in any dovishness from the US central bank, limiting in our opinion the upside potential in the yellow metal[…],

so the push down towards 1,400 USD into the weekly close seemed only a question of time.

But the tide turned on Thursday after US president announced another 10% tariffs on Chinese goods from September onwards.

So, while especially the comments from Fed chairman Powell, but also in the Fed statement all in all can be considered relatively ‘hawkish’ and thus Gold bearish, the next trade war escalation leaves Gold clearly with a bullish touch, especially with risk aversion among market participants rising while 10-year US Treasury yields dropped sustainably below 2%.

That said, a push higher in Gold higher with a minimum target to be found around 1,480/490 USD, probably even higher than that, is likely, especially since between the 12th of August till the 5th of September and Seasonal bullish window opens (pink):

Admiral Markets offers professional traders the ability to trade with a custom, upgraded version of MetaTrader 5, allowing you to experience trading at a significantly higher, more rewarding level. Experience benefits such as the addition of the Market Heat Map, so you can compare various currency pairs to see which ones might be lucrative investments, access real-time trading data, and so much more. Click the banner below to start your FREE download of MT5 Supreme Edition!

Leveraged products (including contracts for difference) are speculative in nature and may result in losses or profit. Before you start trading, you should make sure that you understand all the risks.