Formula 1 is one of the most popular sports in the world with over 350 million viewers worldwide. With 20 teams, 40 drivers and 21 races in the year, it is a chance for sponsors to get their names out there. 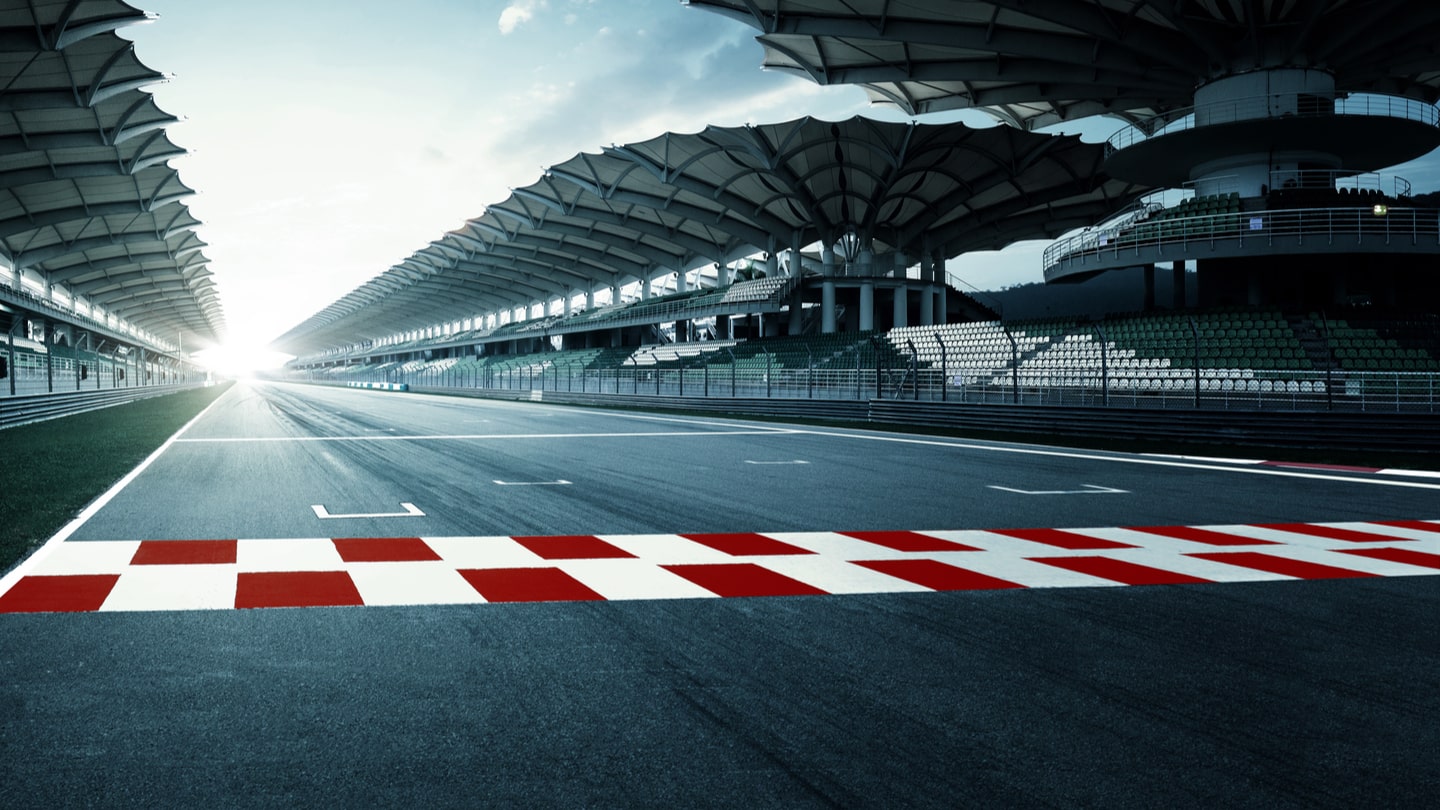 Just like the World Cup football attracts sponsors like Adidas and Coca-Cola, Formula 1 has a raft of sponsors plastered over the circuits, cars, drivers and models. However, while it seems glamourous on the outside, the racing teams work day and night to find that edge to win.

That’s because there are millions of dollars on the line. In fact, there are billions. The top 10 teams spend an average of $2.6 billion per year to keep themselves in the race. However, there is one team that outspends them all. That team is Ferrari, whose Formula 1 budget amounts to $570 million annually. Winning the prize money and the status for recurring sponsorship deals is essential for this team – especially now it has been publicly trading since 21 October 2015.

With the last race of the year at the Yas Marina circuit in Abu Dhabi on 24 November 2018, all eyes are on the Ferrari team and their stock price. Let us have a look at the company’s finances in more detail before we look at possible ways to trade the company within the Admiral Markets platform.

When Ferrari’s shares listed under the stock ticker symbol RACE on 21 October 2015, the shares spiked over 17% higher from its initial public offering price – valuing the company at just over $11 billion. Demand for a piece of the company was high.

However, before this Ferrari’s finances were shrouded in secrecy. It is only after becoming a publicly traded company did Ferrari have to become more transparent in its finances. Since then, analysts have pored over financial statements, revealing some very interesting facts.

For example, an ESPN report revealed that three teams, Ferrari, McLaren and Red Bull Racing share a guaranteed annual prize fund of around $100 million. This is because they are the Constructors Championship Bonus (CCB) teams – the ones which won the most amount of races prior to 2012.

Not only that, Ferrari also receives at least 62.2 million a year just for being Formula 1’s longest standing team, having raced since 1950. Of course, this all sounds great. However, looking at the Formula 1 teams finances paints a different picture: 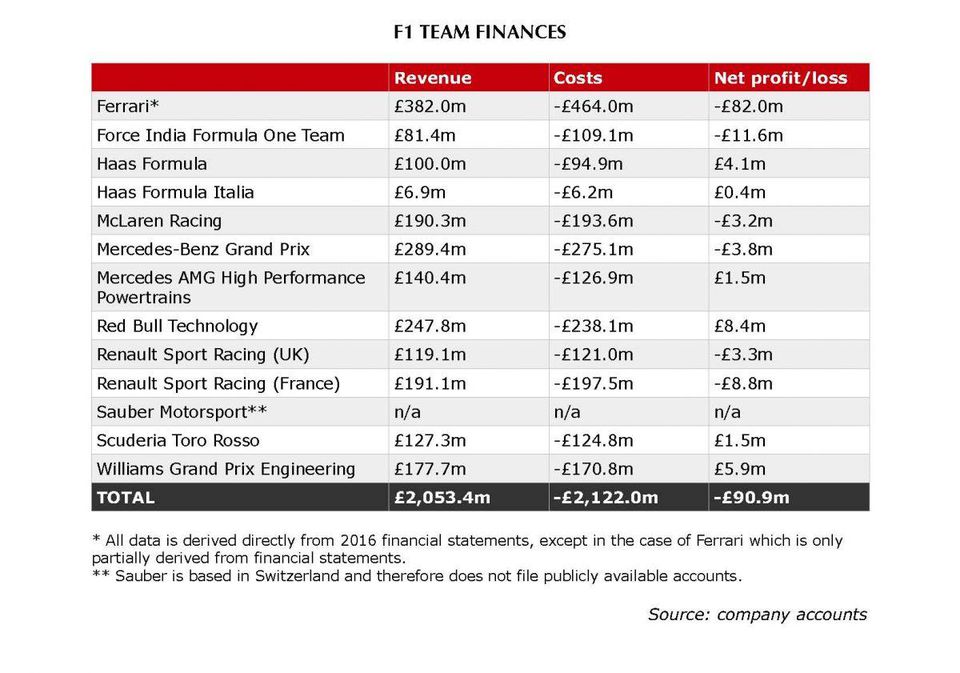 As you can see, Ferrari had the biggest revenue of £382 million. But, they also had the highest costs at £464 million, resulting in a net loss for the year. That’s why winning and maintaining their status is a top priority, financially.

How has their stock price fared this season so far and what kind of strategies can we trade on the stock price of Ferrari? Let’s take a look. 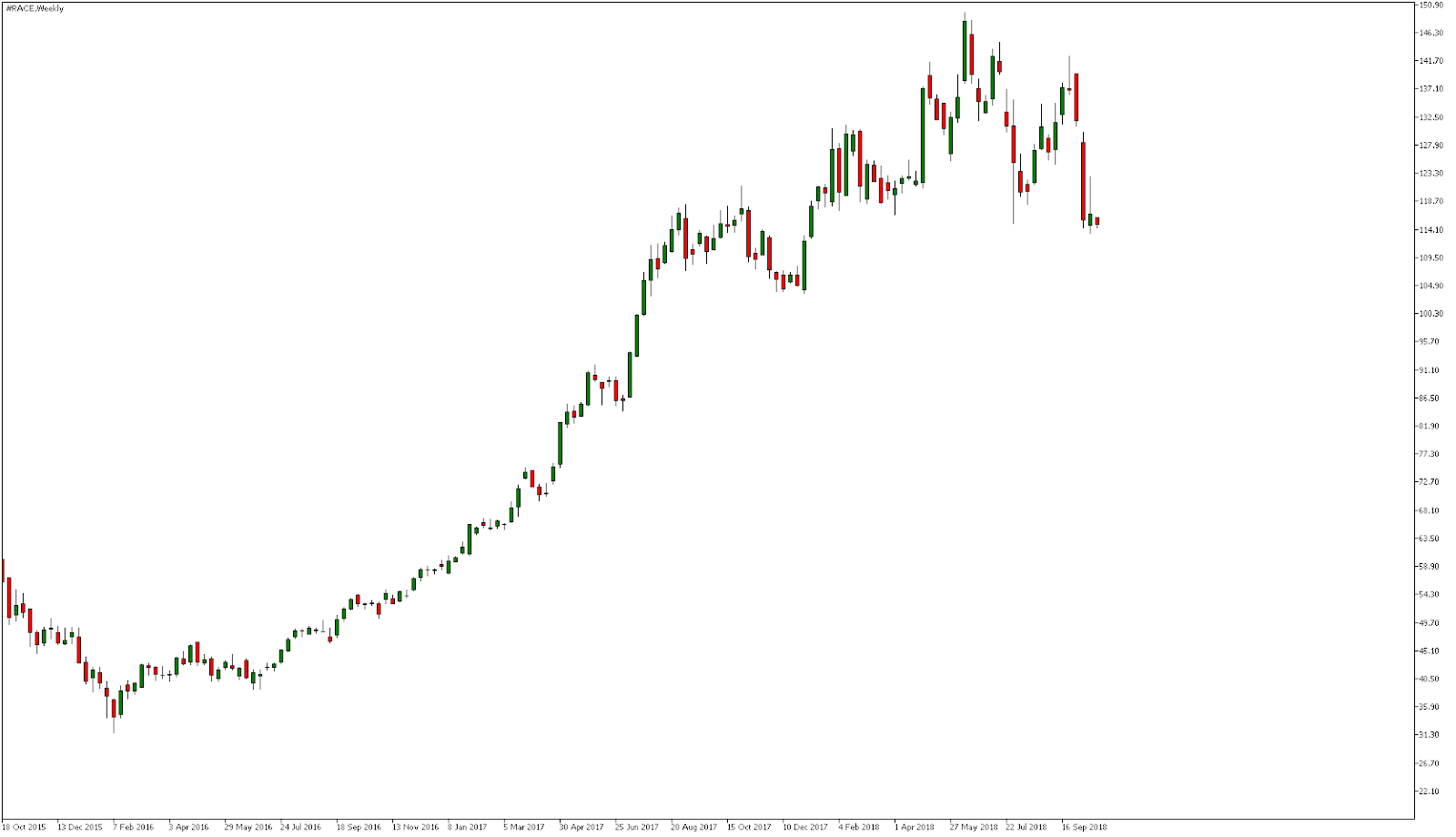 Since Ferrari’s IPO (Initial Public Offering) on 21 October 2015, the stock had a difficult time for the remaining few months of 2015. However, 2016 and 2017 saw higher prices as funds, institutions and retail investors bought in. This series of higher prices is typically called a trending market condition.

Since the all time high in the stock price at $149.54 on the 10 June 2018, the stock price has struggled somewhat. Why? The new owners of the Formula 1 brand, Liberty Media, have expressed their desire to make the sport more of a level playing field by introducing budget caps in 2021 when the team contracts expire. This has caused the bigger budget teams, such as Ferrari and Mercedes, to threaten to quit the sport and start their own racing brand.

The budget cap is a huge worry for these bigger teams, as their dominance, status and prize money are all being threatened.

The Formula 1 budget cap is planned for 2021, in attempt to make the sport more of a level playing field and therefore, more attractive. Details were announced to the team at the Bahrain Grand Prix on Sunday 8 April 2018.

The budget cap gives each team USD 150 million, with more evenly distributed prize money – clearly affecting Ferrari the most. But, a trader never wants to trade on just a thought, a trader would want to see how the market reacts first.

Since the announcement and the ongoing developments between the Formula 1 owners, Liberty Media and the major teams, the stock price of Ferrari entered a period of sideways consolidation or a range-based market as the chart below shows: 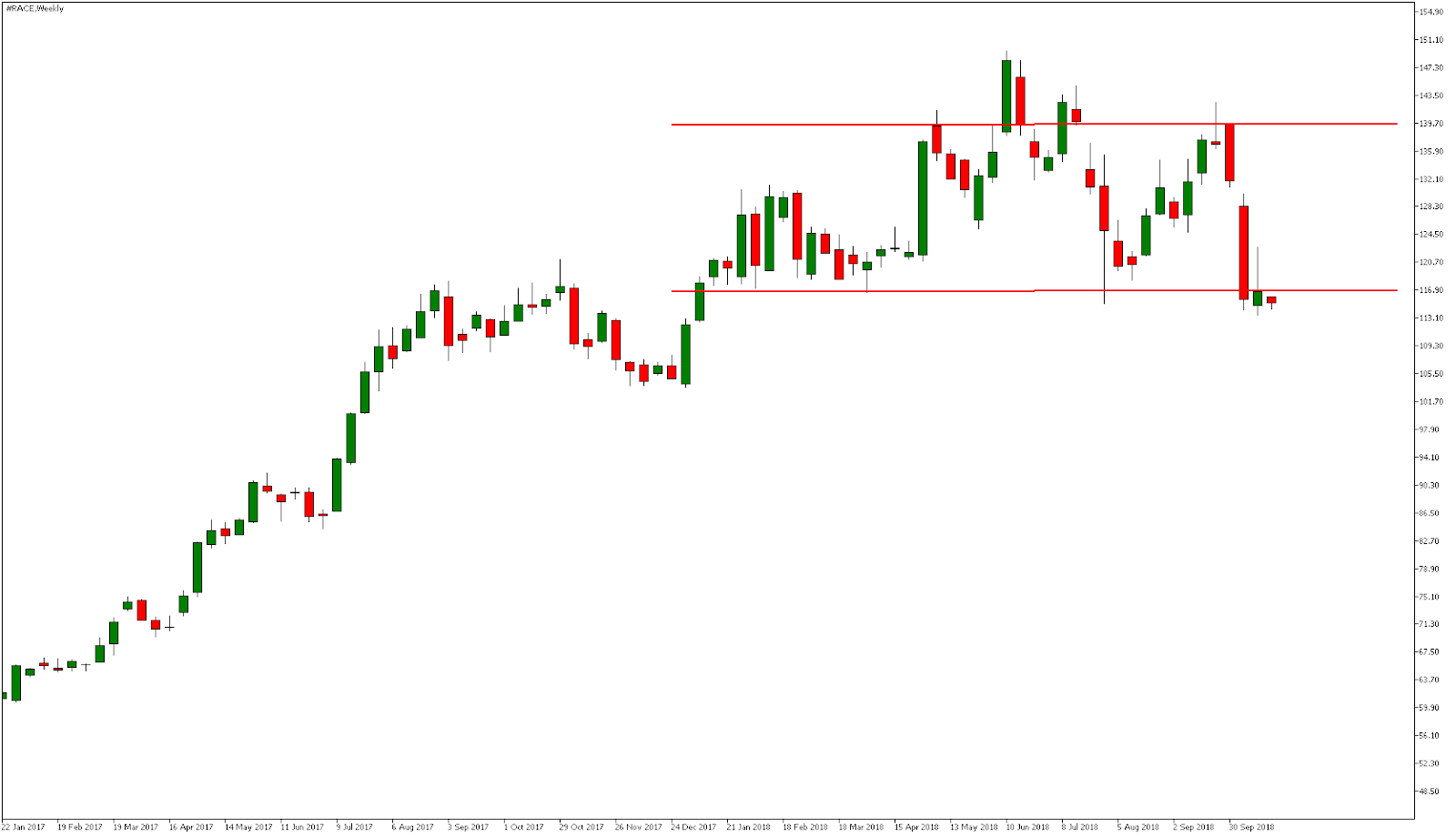 The hallmark of a range-based market condition is when price trades in between two price points. In the chart above these lines are denoted by the two red horizontal lines. One is providing upper resistance and one is providing lower support. In a range based market condition price will often trade in between these levels as neither buyers nor sellers want to take control of the market.

With the uncertain outlook on Ferrari’s ability to perform and their financial perks being threatened, investors, during this period of price consolidation seem to be waiting on the sidelines. The question is how can a trader take advantage of such conditions? Let’s take a look at both trending markets and ranging markets.

During the period of 2016 to mid-2018 we can see that Ferrari’s stock price was trending higher. The reason we are able to identify this is frome the use of trading indicators that help us make trading decisions.

For example, moving averages are very popular trend-based indicators that help determine whether the market is trending or not. In essence, they calculate a user-defined amount of previous closing prices to then find the ‘average’ price. This is then plotted on a chart to see the average of prices over a certain period of time. For example, the chart below shows two moving averages plotted on Ferrari’s stock price: 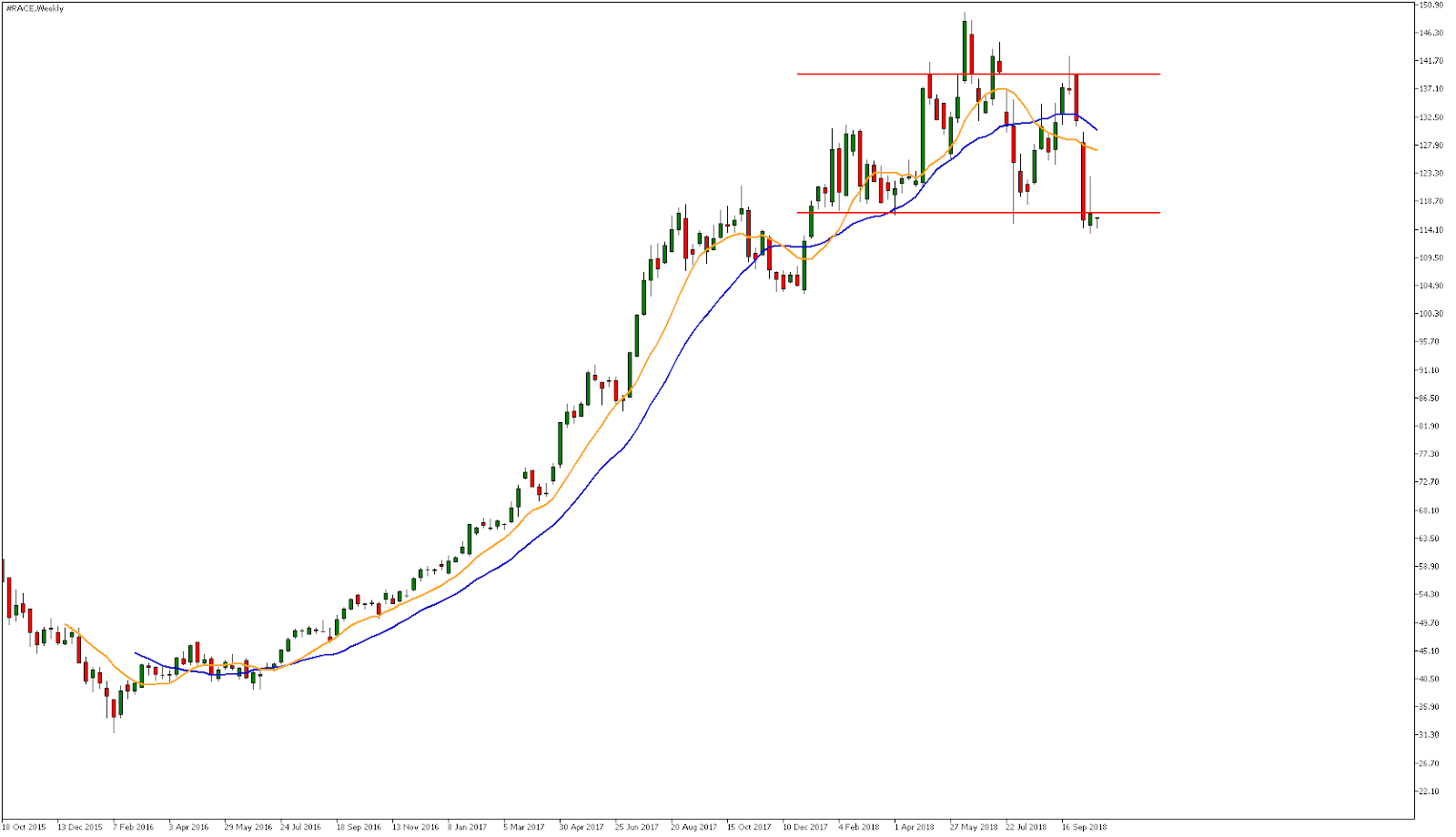 While there are many indicators available to use on the Admiral Markets MT5 platform, with these moving averages we can simply identify the right market conditions to choose the right tools for the job. Let’s take a look at how we could trade this current period of consolidation.

Within the trading community there are those who use fundamental analysis and those who use technical analysis. The most common approach is to utilise both. So what are the differences?

So far, we have used fundamental analysis to generate the ‘trading idea’. Essentially, it gives the trader a reason to focus on a particular market. When it comes to trading that ‘idea’, technical analysis becomes useful to identify the market condition but also where a trader could possibly buy or sell.

For example, we can use simple technical analysis tools like support and resistance levels to help identify turning points in a range based market. Let’s zoom in to the most recent range based market condition on Ferrari’s stock price: 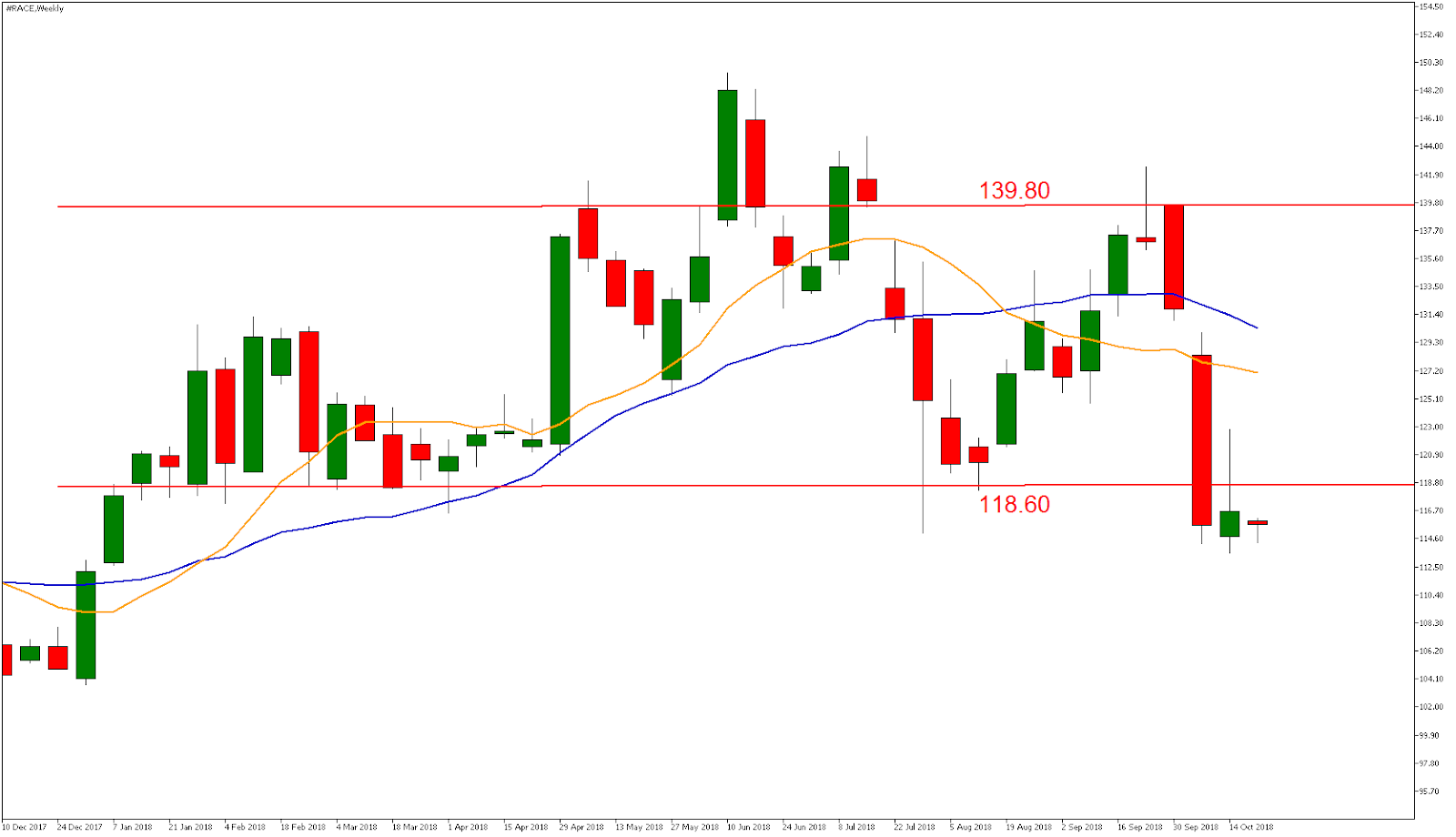 Let’s take a look in a little more detail.

A pin bar reversal is a simple price action pattern which shows the rejection of a price level. 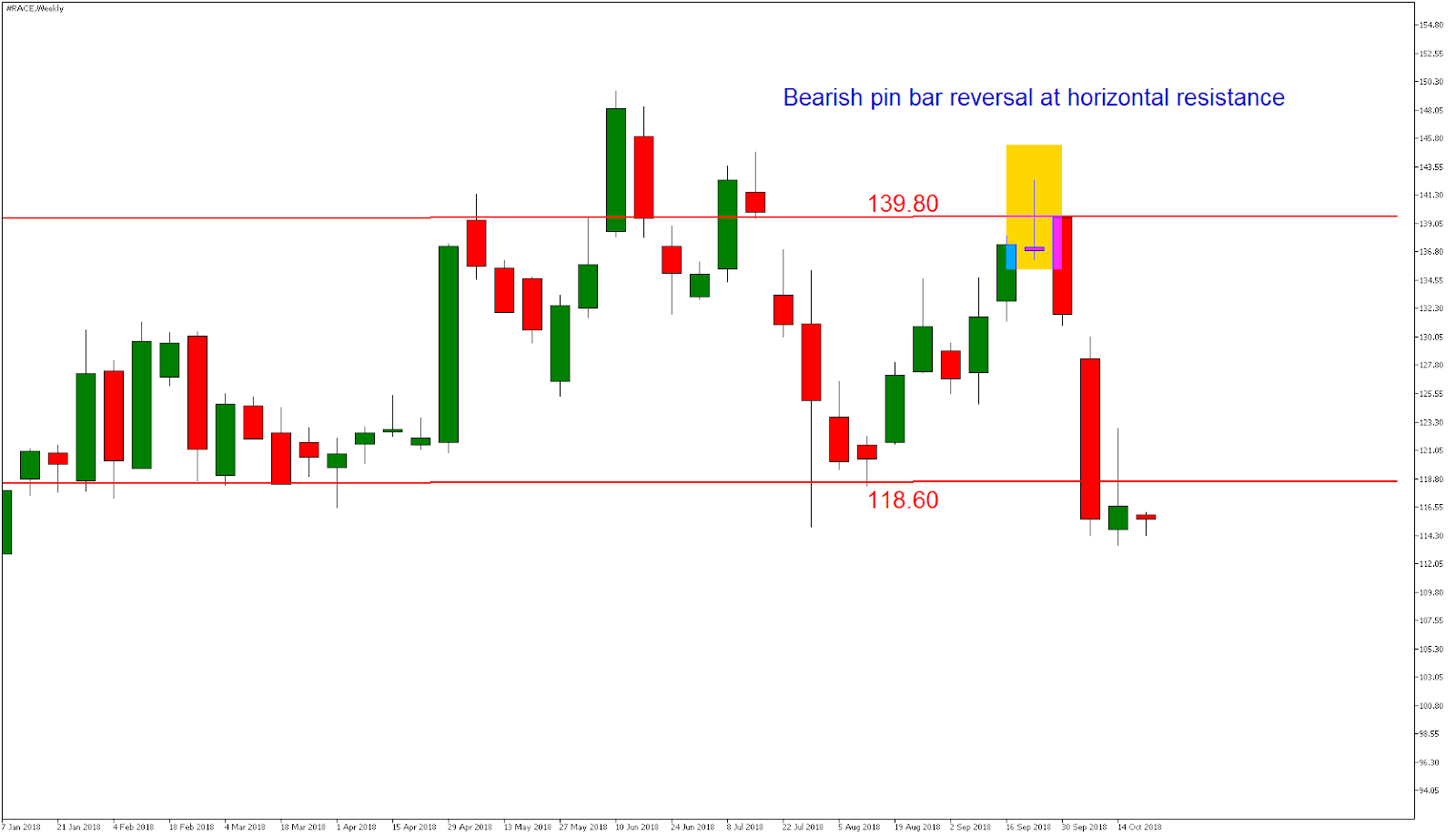 In the chart above, the yellow box represents a bearish pin bar reversal – a very well-known price action pattern. It shows buyers trying to push the market higher but failing and allowing sellers to step in to take control of the market and push it back down. Some traders would use this setup at a horizontal resistance line to enter a short position where they would profit if the market moves lower.

A trader could have entered at $136.22, the break of the bearish pin bar’s low, with a stop loss at $142.47, the high of the pin bar. If the market traded through the entry price and then reversed to hit the stop loss, then trading 50 lots the trader would have lost $312.50 on the trade.

However, in this instance the trade did not trigger the stop loss and actually moved lower, all the way down to the lower horizontal support level of the stock’s trading range. At this target level of $118.60, the trader would have made approximately $881.00 on the 10 October.

Within the world of financial trading there are many different styles. For the most part bigger players, like hedge funds, tend to start by generating an ‘idea’ on what they want to buy or sell. In essence, this is their research.

In this article we started with a well-known event – Formula 1’s Abu Dhabi Grand Prix – and broke down the different elements to find a suitable market to trade on. In this instance, it was the impact of the budget cap on the biggest teams that caught our attention. The team in question was Ferrari, now that they are a publicly traded company and available on the Admiral Markets MT5 platform to trade. The preparation and planning of the trade could have happened long before the trade was executed which can help traders execute their trading decisions with confidence and discipline.